CAMRA Club of the Year… Again!

This year marked the fifth time in a row that the Tyneside and Northumberland branch of the Campaign for Real Ale (CAMRA) awarded Newcastle Cricket Club its coveted ‘Club of the Year’ award.

CAMRA are an independent, voluntary organisation campaigning for real ale, community pubs and consumer rights, and have branches throughout the country. Each year they select the local outstanding pubs and clubs worthy of recognition for their Good Beer Guide, and yet again NCC’s quality of beer and welcoming atmosphere have been rewarded with the region’s top honour.

Jan Anderson from CAMRA (pictured below, right) came along to present new club steward Nichola Price (left) with the award, and praised the work Nichola and her team had done in winning the award for the fifth year in a row.

We’re delighted with the recognition the award brings, and will be doing all we can to make it six in a row throughout 2017. 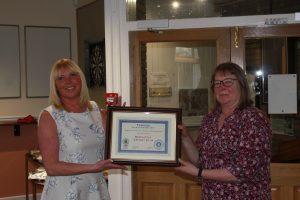 Come and watch Cricket and Football:

Winter times are as Summer but the bar will only be open Fri - Mon.